With Class of 2024 results now coming in on the early admissions round at top colleges and universities around the country, here is our expert assessment on what we’ve learned thus far. We’ll continue to update our information as more schools release their information.

Unlike past years that saw big gains in everyone’s early numbers, this year was more of a mixed bag. Brown saw its number of early decision applicants grow by 8 percent, on top of a 21 percent increase in ED last year. Cornell, too, saw its pool grow by 7.4 percent and a news release from the university reminds us that the number of early decision applicants has grown 90 percent over the last decade.

Natural disasters, school shootings, global economic uncertainty, teacher strikes, and demographic trends are cited by admissions deans as possible explanations for declining early pools. It could also be that savvy students are being more strategic in how they use their early option, aiming for a surer bet rather than going for the long-shot. We’ll continue to monitor these trends and share our perspective as more data are released in the coming months.

WHAT WE KNOW SO FAR

TOUGHEST SCHOOL TO GET INTO THIS EARLY ROUND?

Based on publicly reported data, the toughest early admission pool this year belonged to MIT. This year, 9,291 students applied for early admission to MIT, and 687 (7%) were offered admission. 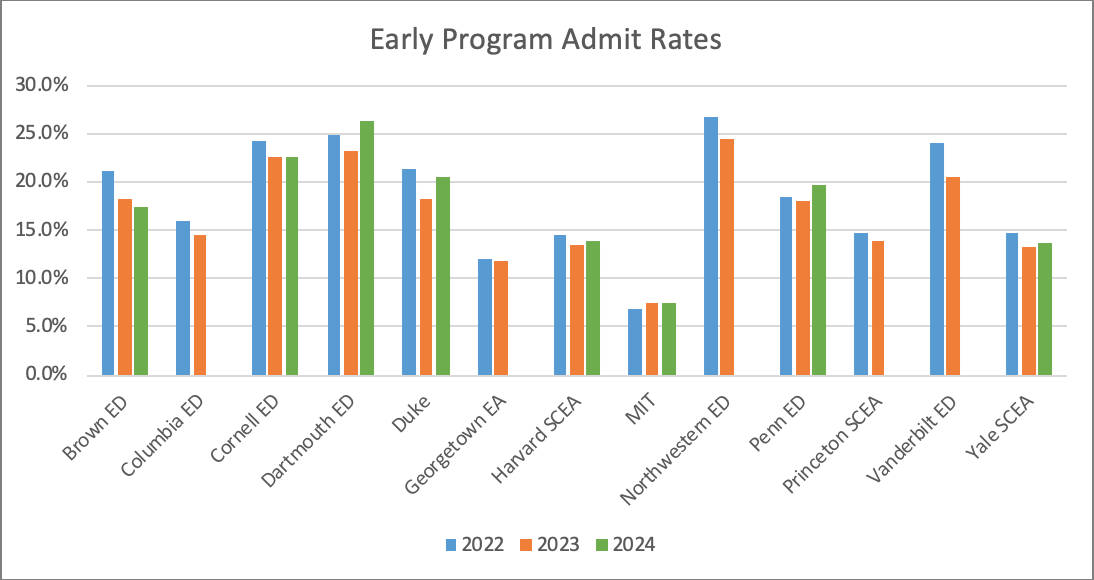 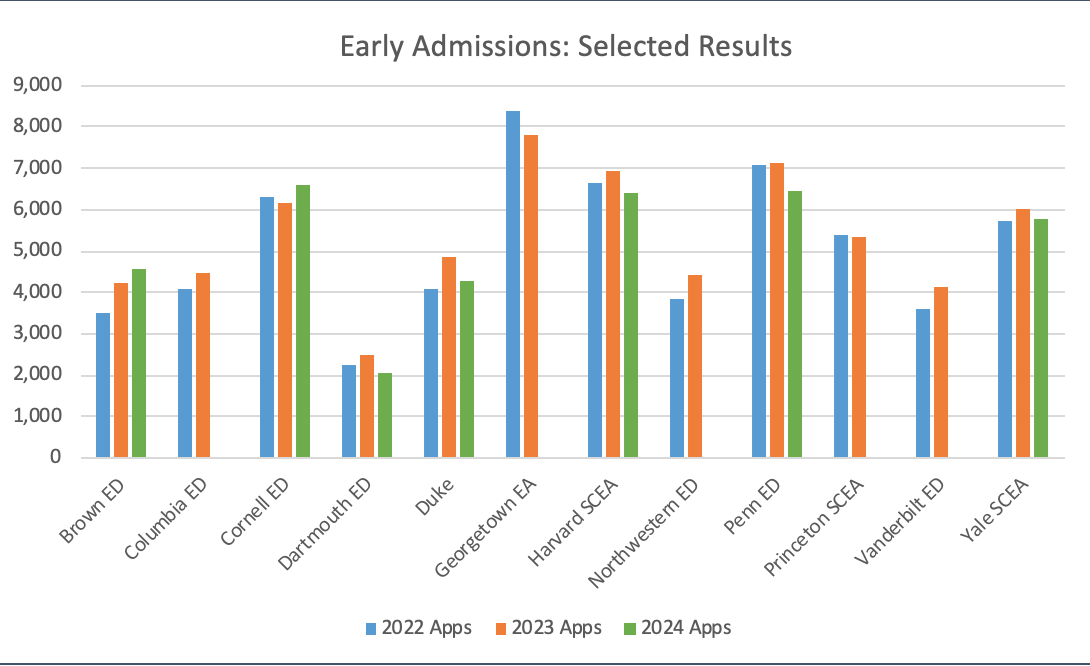 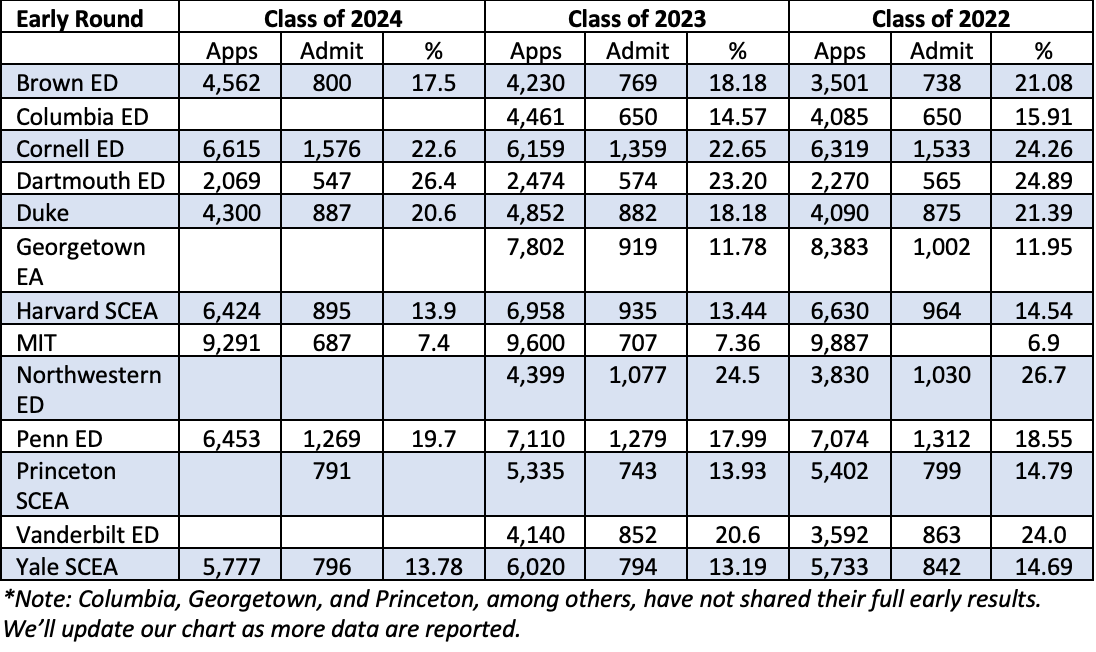 Brown admitted 800 students this December, corresponding to roughly 45 percent of its incoming class. The admitted group represents just 17.5 percent of its 4,562 early decision applicants, making this the most competitive early decision process they’ve ever experienced. The 4,562 students represented an 8 percent increase in volume over last year. Dean of Admissions Logan Powell cites The Brown Promise – a new initiative which replaces all loans in University financial aid packages – as having a major impact on the size and composition of the early pool. 62 percent of those admitted to Brown in early decision applied for financial aid, up from just 50 percent two years ago. Brown continues to push to diversify their student body, which is especially evident in the five percentage point increase in the number of first gen students in the ED admit group (17 percent this year versus 12 percent last year).

For the first time in four years, Cornell’s early decision admit rate increased. The university received 6,615 early decision applicants (a 7 percent increase over the past year’s ED applicant numbers) and admitted 23.8 percent (1,576 students), meaning its admit rate increased by 1.2 percentage points. Those admitted are estimated to comprise 49 percent of the Class of 2024. Interestingly, the number of women admitted this year decreased by four percentage points to 51.4 percent. Hard to know exactly what to make of this statistic—other than perhaps Cornell was concerned that it might be approaching a tipping point with respect to gender balance.

Dartmouth has offered admission to 547 early decision applicants, for an admit rate of 26 percent. The College’s official release notes that the early group includes record percentages of public high school students (54 percent), first-generation students (15 percent), foreign citizens (12 percent), and students of color (35 percent). The children of Dartmouth alumni represent 15 percent of the accepted students and recruited athletes make up 25 percent of the group.

At Duke, 887 students were admitted from a pool of 4,300 early decision applicants. With a drop in early applicants (over 11 percent from the prior year), Duke’s early acceptance rate increased to 21 percent, making this year’s ED process a bit less competitive than the past couple of years. Altogether, these students will comprise 51 percent of the incoming Class of 2024. Students of color comprise 46 percent of those admitted and international students make up another 6 percent.

Harvard saw its early action pool decrease by 7.7 percent, the first time since the fall of 2013 that the university’s early action pool posted a decline. In all, 895 of 6,424 early applicants were offered early admission to the Class of 2024. The 13.9 percent acceptance rate represents a 0.5 percent increase from last year. The early admission acceptance rate has not increased year-over-year since 2013. Dean Fitzsimmons takes a global view to explain the decrease, pointing to everything from wildfires in California (the number of early applicants from California declined nearly 17 percent) to school shootings and economic uncertainty to declining numbers of high school seniors. Women comprise 51.7 percent of the admitted class thus far, slightly more than last year, when women made up 51.3 percent of the early admit class. It seems that Harvard tipped in favor of women who are interested in the physical sciences and computer science. This year, 57.4 percent of admitted students who said they intend to concentrate in the physical sciences are women, compared to 52.9 percent last year and 33 percent the year before. For computer science, 49.1 percent of interested students are women, an increase from 42.9 percent last year, and 29 percent the year before.

Explaining the drop in ED application volume, Dean Eric Furda in an interview in the student paper seems to suggest a return to “normal” after a “bump” caused by higher scores on the redesigned SAT and students who therefore saw themselves as stronger. He, too, seems to raise the notion that natural disasters, power outages, and teacher strikes impacted the numbers of students applying ED.

Princeton University has offered admission to 791 students in its early pool this year (although the university coyly refrains from telling us how many students applied, suggesting it, too, saw a smaller pool). Of those admitted, 48 percent of students self-identify as students of color, 16 percent are from low income backgrounds, 13 percent are first generation college students, and 11 percent are international students.

Yale’s early application volume also decreased this year to 5,777, down 4 percent from last year’s record-setting pool of 6,020 students. Although short on details about the admitted group, a news release points to an announcement earlier this year from Yale that the past several classes have all set records for socioeconomic diversity, with more than 1,000 undergraduates receiving Federal Pell grants. Of those, more than 600 are in the first-year and sophomore classes. Additionally, the number of students per class who will be the first in their families to graduate from college has increased by 75 percent in the past six years.

Over on the West Coast, there are crickets from Stanford on the details of its early applicant pool and REA admits. The school announced last fall that starting with the Class of 2023, it will stop releasing admissions data until well after the admissions cycle concludes. The change was intended to reduce the “outsized emphasis placed on the admit rates at U.S. colleges and universities,” according to the Stanford news site. “By focusing on the admit rate, talented students who would thrive at Stanford may opt not to apply because they think Stanford seems out of reach,” said Provost Persis Drell.

But, stop the presses, Stanford did just release its overall admissions data for the Class of 2023. Its admit rate fell to a record-low 4.34 percent. Out of a record-high 47,498 applicants to Stanford’s Class of 2023, 2,062 were offered admission.

Stay tuned for more updates as they become available!